Fibromyalgia is a condition usually affects women, and is associated with pain in several areas of the body at any given time,  fatigue, 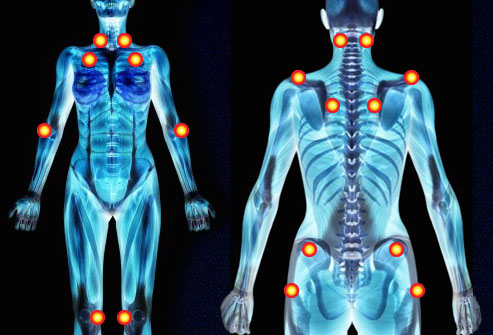 and depression. Fibromyalgia is characterized by widespread musculoskeletal pain along with sleep, memory, and mood conditions. Symptoms often show up soon after physical trauma, like a car acccident,  or psychological stress. Other times, symptoms occur without any trauma. Research has shown that women are more likely to develop fibromyalgia than men.  Patients  with fibromyalgia have tender points on the body affecting the neck, shoulders, trapezius/rhomboid/scalene/levator scapulae muscles, buttocks, hips, arms, ankles and legs. These points are painful when pressure is applied.  Patients with fibromyalgia often have associated disorders including thyroid dysfunction, irriable bowel syndrome, temporomandibular joint pain,  depression, and anxiety.

Patients present with deep constant aches and an overall decrease in normal ranges of motion due to tight musculature.. The pain occurs in several areas of the body, usually between the shoulder blades.  Additional pain occurs with pressure is applied to certain areas in the body, known as trigger points. The trigger points occur in several areas, including the back of the head, shoulders, chest, outer part of the elbows, the outside of the hips, and inner knees and ankles. Patients may also present with fatigue. Most times these patients look unwell, and are generally irritable.

The exact cause of fibromyalgia is unknown. Several research studies have been done in the past and are ongoing. To date most of these studies have been inconclusive. Patients with fibromyalgia may have a lower pain tolerance due to increased sensitivity to pain signals in the brain. Some researchers feel that there is genetic factors involved.  Other theories include reduced neurotransmitters in the brain leading to constant pain. Fibromyalgia is diagnosed most often in women. Female hormones may play a role in experiencing pain.  Vitamin D deficiency is also a possible cause.

Treatment of Fibromyalgia by a Chiropractor involves, diet, exercise, aerobic activity, stretching and strengthening, manipulation of 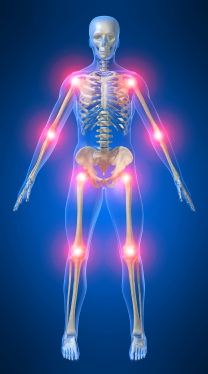 affected joints of the spine, use of modalities such as low volt current, ultrasound, laser etc., to help reduce inflammation and restore normal biomechanics.  Sometimes patients benefit from a psychological evaluation.  Fibromyalgia is a difficult condition to treat, patients respond best when incorporating all of the above into their treatment program.

Send Us an Email

Find us on the map