What is Carpal Tunnel Syndrome?


Carpal tunnel syndrome occurs when the Median nerve, which runs from the forearm into the palm of the hand, becomes compressed 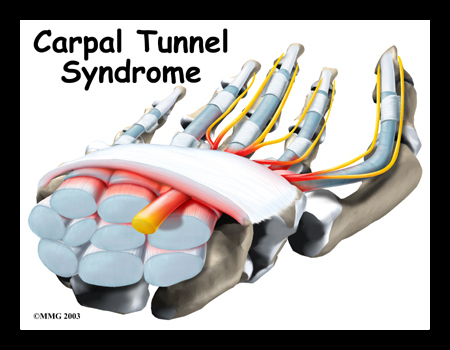 at the wrist. The Median nerve controls sensations to the palm side of the thumb and fingers (although not the little finger), as well as impulses to some small muscles in the hand that allow the fingers and thumb to move. The carpal tunnel - a narrow, rigid passageway of ligament and bones at the base of the hand - houses the Median nerve and tendons. Sometimes, thickening from irritated tendons or other swelling narrows the tunnel and causes the median nerve to be compressed. The result may be pain, weakness, or numbness in the hand and wrist, radiating up the arm. Although painful sensations may indicate other conditions, carpal tunnel syndrome is the most common and widely known of the entrapment neuropathies in which the body's peripheral nerves are compressed or traumatized.


Symptoms usually start gradually, with frequent burning, tingling, or itching numbness in the palm of the hand and the fingers, especially the thumb and the index and middle fingers. Some carpal tunnel sufferers say their 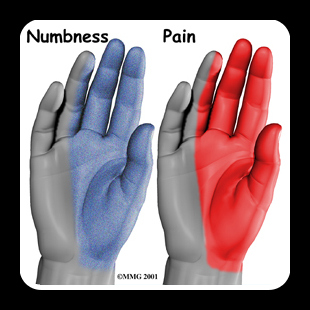 fingers feel useless and swollen, even though little or no swelling is apparent. The symptoms often first appear in one or both hands during the night, since many people sleep with flexed wrists. A person with carpal tunnel syndrome may wake up feeling the need to "shake out" the hand or wrist. As symptoms worsen, people might feel tingling during the day. Decreased grip strength may make it difficult to form a fist, grasp small objects, or perform other manual tasks. In chronic and/or untreated cases, the muscles at the base of the thumb may waste away. Some people are unable to tell between hot and cold by touch.


Carpal tunnel syndrome is often the result of a combination of factors that increase pressure on the median nerve and tendons in the carpal tunnel, rather than a problem with the nerve itself. Most likely the disorder is due to a congenital predisposition - the carpal tunnel is simply smaller in some people than in others. Other contributing factors include trauma or injury to the wrist that cause swelling, such as sprain or fracture; overactivity of the pituitary gland; hypothyroidism; rheumatoid arthritis; mechanical problems in the wrist joint; work stress; repeated use of vibrating hand tools; fluid retention during pregnancy or menopause; or the development of a cyst or tumor in the canal. Carpal tunnel syndrome is also associated with pregnancy and diseases such as diabetes, thyroid disease, or rheumatoid arthritis.  In some cases no cause can be identified.

Repetitive and forceful movements of the hand and wrist during work , sports, or daily activities can cause carpal tunnel syndrome. Repeated motions performed in the course of normal work or other daily activities can result in repetitive motion disorders such as bursitis and tendonitis. Writer's cramp - a condition in which a lack of fine motor skill coordination and ache and pressure in the fingers, wrist, or forearm is brought on by repetitive activity - is not a symptom of carpal tunnel syndrome.


Women are 3 times more likely than men to develop carpal tunnel syndrome, perhaps because the carpal tunnel itself may be smaller in 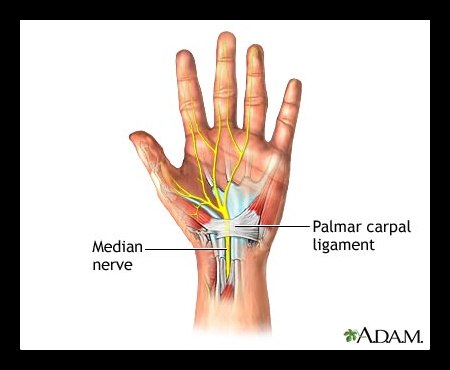 women than in men. The dominant hand is usually affected first and produces the most severe pain. Persons with diabetes or other metabolic disorders that directly affect the body's nerves and make them more susceptible to compression are also at high risk. Carpal tunnel syndrome usually occurs only in adults.


Early diagnosis and treatment are important to avoid permanent damage to the median nerve. A physical examination of the hands, arms, shoulders, and neck can help determine if the patient's complaints are related to daily activities or to an underlying disorder, and can rule out other painful conditions that mimic carpal tunnel syndrome. The wrist is examined for tenderness, swelling, warmth, and discoloration. Each finger should be tested for sensation, and the muscles at the base of the hand should be examined for strength and signs of atrophy. Routine laboratory tests and X-rays can reveal diabetes, arthritis, and fractures.

CHIROPRACTORS can use specific tests to  re-produce the symptoms of carpal tunnel syndrome. The Tinel test, the CHIROPRACTOR  taps on or presses on the median nerve in the patient's wrist. The test is positive when tingling in the fingers or a resultant shock-like sensation occurs. The Phalen, or wrist-flexion, test involves having the patient hold his or her forearms upright by pointing the fingers down and pressing the backs of the hands together. The presence of carpal tunnel syndrome is suggested if one or more symptoms, such as tingling or increasing numbness, is felt in the fingers within 1 minute. Chiropractors may also ask patients to try to make a movement that brings on symptoms.

Sometimes it is necessary to confirm the diagnosis by use of electrodiagnostic tests. In a nerve conduction study, electrodes are placed on the hand and wrist. Small electric shocks are applied and the speed with which nerves transmit impulses is measured. In electromyography, a fine needle is inserted into a muscle; electrical activity viewed on a screen can determine the severity of damage to the median nerve. Ultrasound imaging can show impaired movement of the median nerve. Magnetic resonance imaging (MRI) can show the anatomy of the wrist but to date has not been especially useful in diagnosing carpal tunnel syndrome.


Treatments for carpal tunnel syndrome should start  as early as possible, under a Chiropractor's  direction. Underlying causes such as 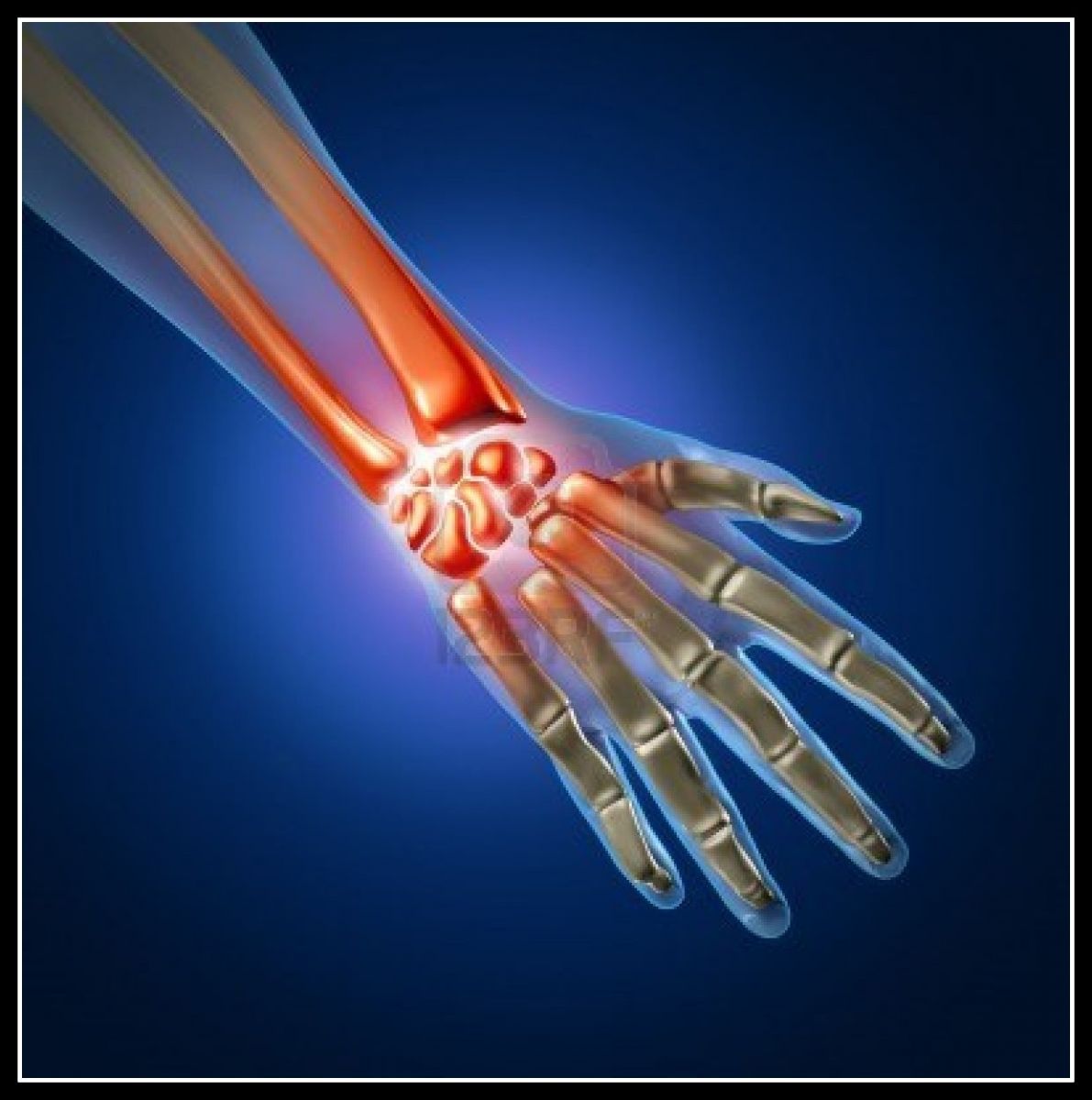 diabetes or arthritis should be treated first. Initial treatment generally involves resting the affected hand and wrist for at least 2 weeks, avoiding activities that  worsen symptoms, and immobilizing the wrist in a splint/brace  to avoid further damage from twisting or bending. If there is inflammation, applying cold packs can help reduce swelling. Chiropractic treatments involve Low Volt Current or TENS, Ultrasound, Friction Massage, gentle mobilizaton of the Carpal bones and fingers.  The treatment objective is to reduce inflammation, decrease swelling around the Median nerve, and restore normal mechanics to the arm,wrist,hand.    Treatment frequency and duration vary from patient to patient.  Starting treatment as soon as possible increase the effectiveness of the treatments.  The Chiropractor will provide stretches and exercises when appropriate.

Send Us an Email

Find us on the map